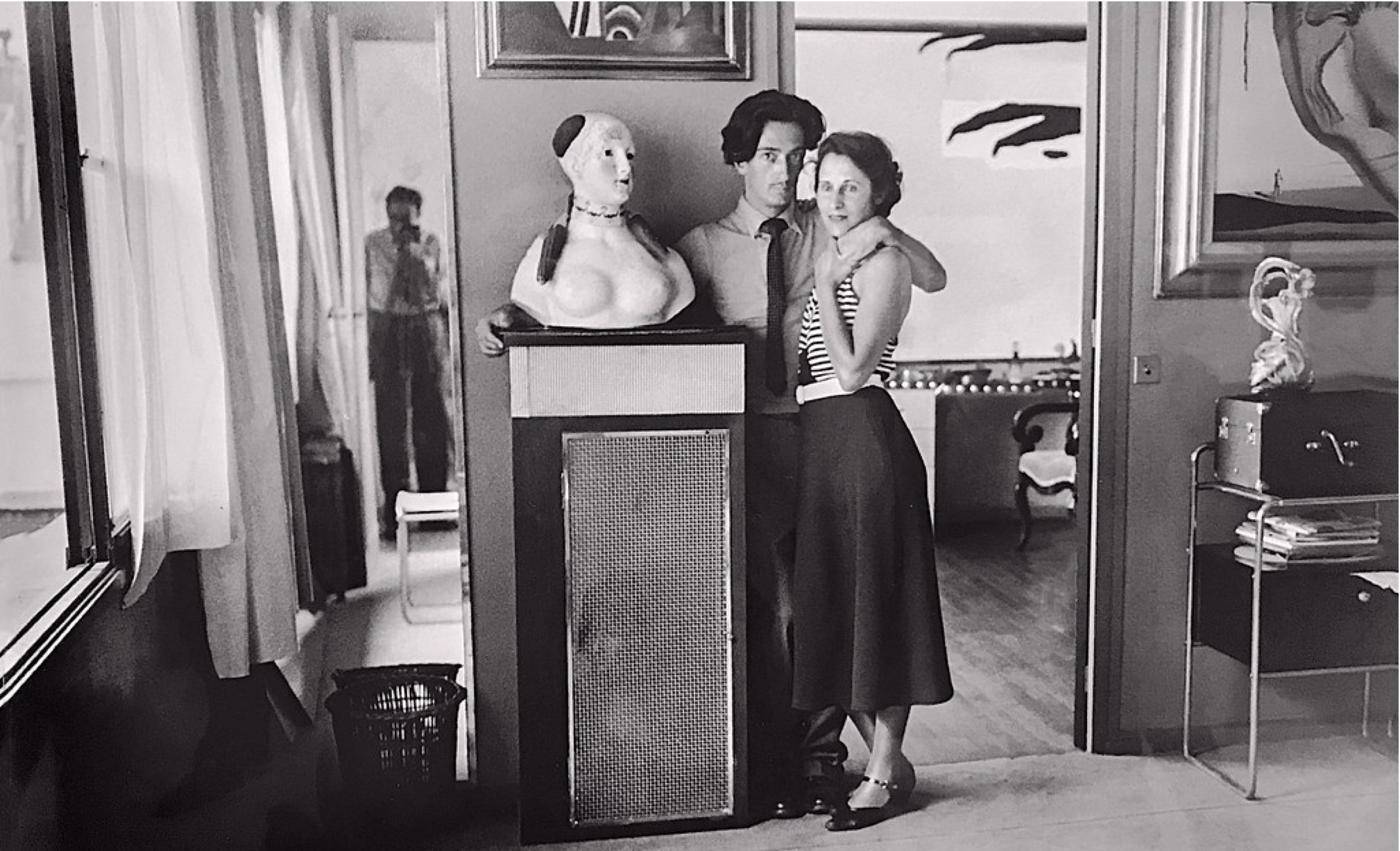 The iconoclastic artist Salvador Dali is best known for his surreal paintings—scenes of otherworldly landscapes punctuated with melting clocks and disembodied body parts. His work, and that of his surrealist contemporaries sought inspiration in the chaos of the unconscious mind and its unrealized desires.

But Dali did more than read Freud and paint his dreamscapes. Less well-known is his fascination with the physical space, and his personal championing of surrealist objects. In fact, Dali’s furniture and objects are some of the earliest and strangest examples of avant garde industrial design. Why furniture? The answer seems to lie in Dali’s eclectic (and often controversial) Parisian social circle in the 1930s, one that encompassed the who’s-who of the avant garde from CoCo Chanel to Man Ray. One particular friend was Jean Michel Frank,the interior designer often credited as a pioneer of minimalism. Frank purportedly admired the artistic collaborations of the ballet choreographer Diaghalev and Picasso, and wrote that "I wish one could more often see artists collaborating in arranging houses. The result would be, at the very least, something of our time, and alive."

Enter Dali. In 1935, Dali completed The Face of Mae West which may be used as a Surrealist Apartment, a watercolor that exposes the face of the famous silver screen star within the fixtures of a grand room. The concept hinged on Dali’s obsession with a vision of three dimensional art objects that subverted the viewer’s conception of reality, a future where "museums will fast fill with objects whose uselessness, size and crowding will necessitate the construction, in deserts, of special towers to contain them.”

Unsatisfied with the two-dimensional gouache painting, Dali brought the lips of the painting to life with his “Mae West Lips Sofa”, upholstered in Schiaparelli Pink (the exact shade of West’s preferred lipstick) and first manufactured by Frank in 1936. 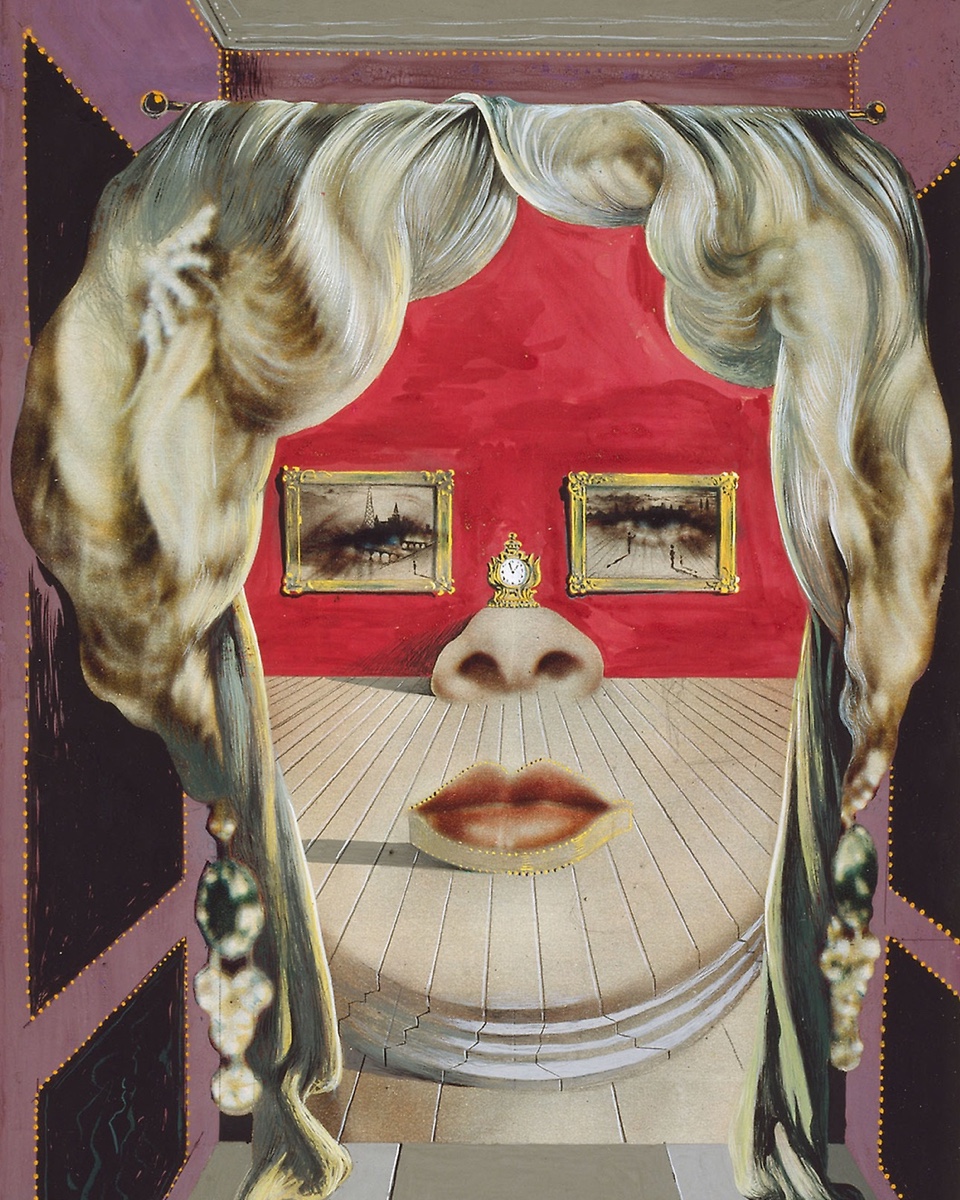 "The Face of Mae West Which May Be Used as a Surrealist Apartment" was painted in 1935. Image via the Art Institute of College. 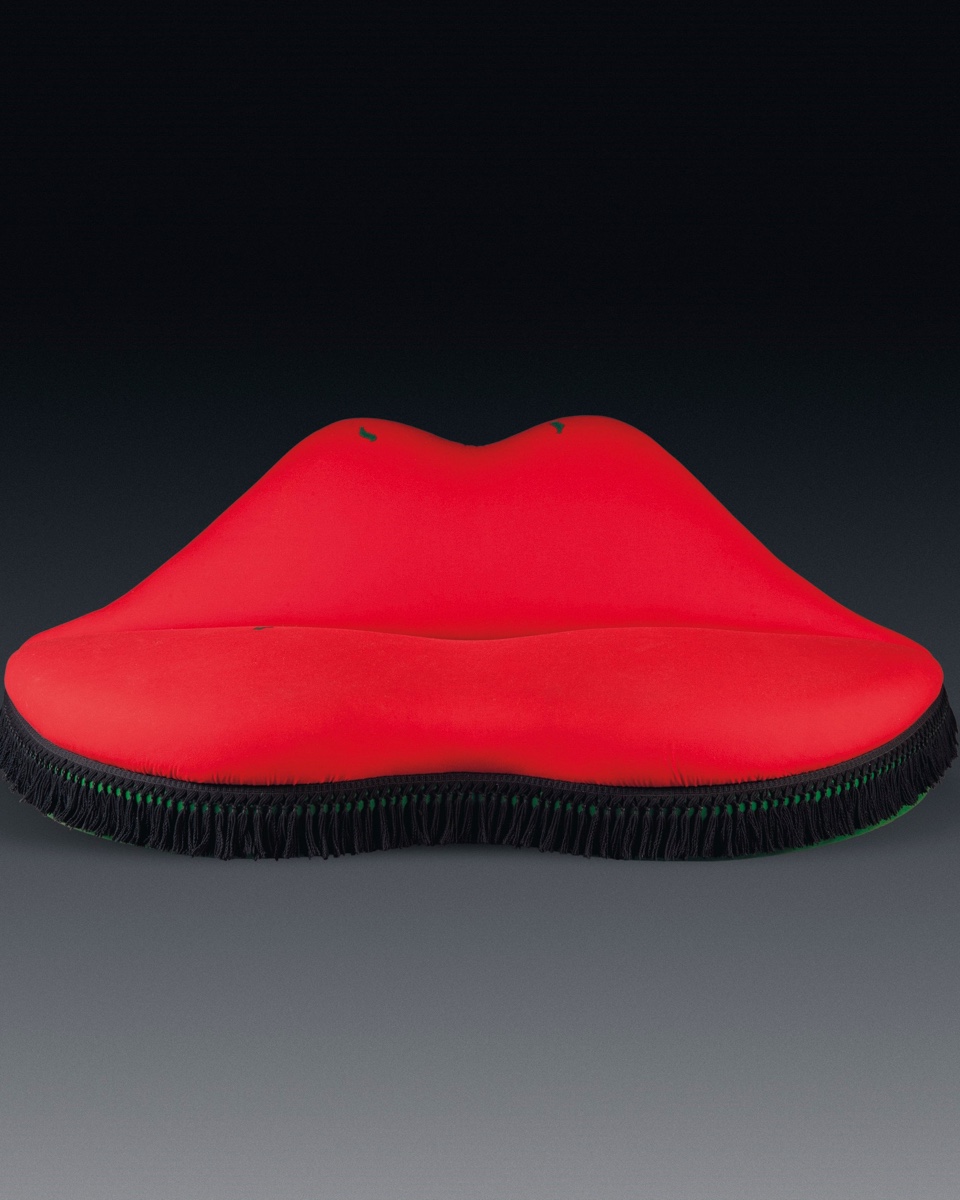 Dali would continue to translate the visions of his surrealist paintings into physical existence. From the foreground of his 1935 painting Woman with a Head of Roses sprung a strange, spindly chair chair with shoes and a slender hand adorning the arm-rest, rendered with the painting’s golden finish and perspective-bending geometry. The Leda Table, seemingly morphed from an outstretched metallic arm, completed the set. Other work includes “The Lamp with Crutches”, also produced in partnership with Frank, a harp with barbed-wire strings presented as a gift to Harpo Marx, and a 500 piece set of dinnerware produced in the late ‘70s in partnership with the German ceramics manufacturer Suomi. 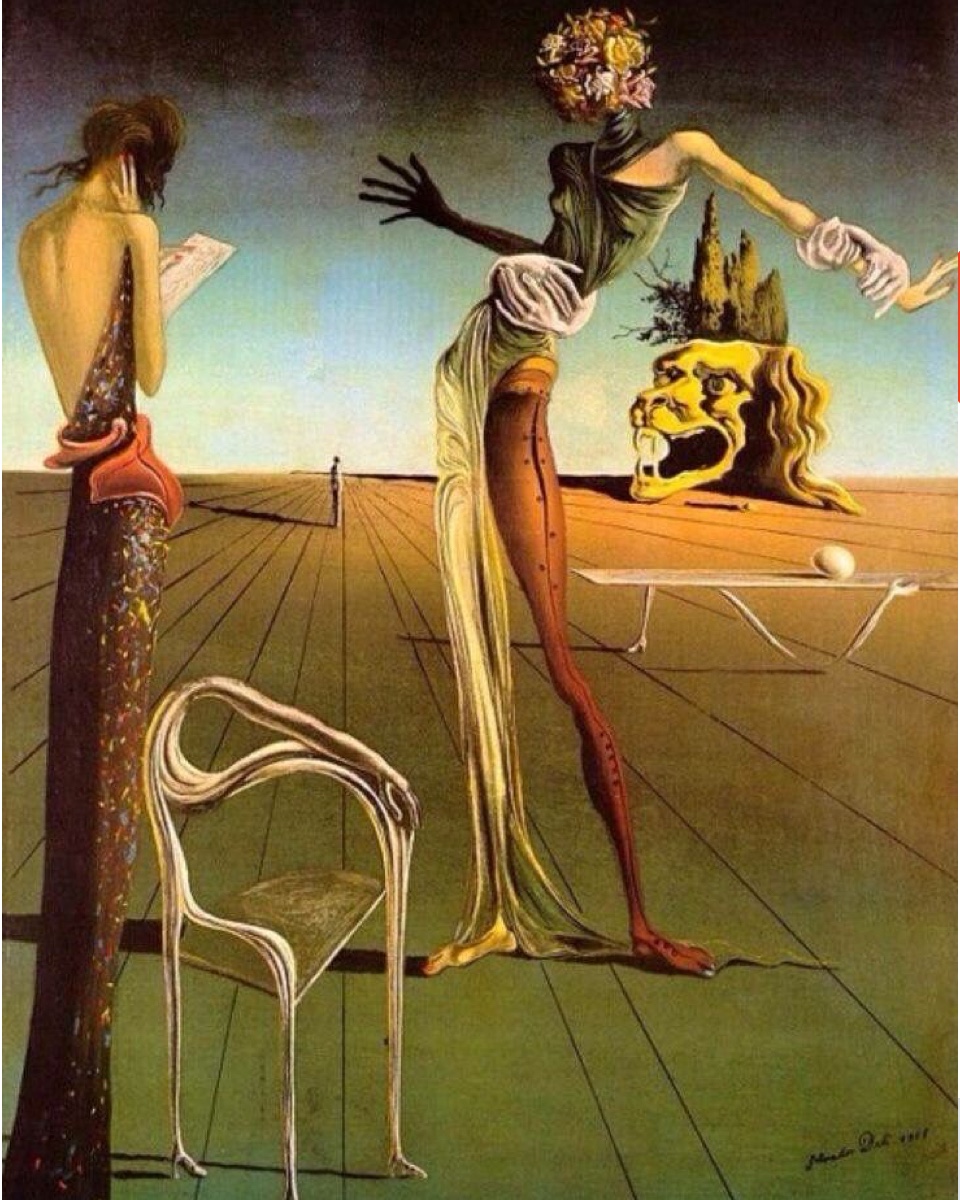 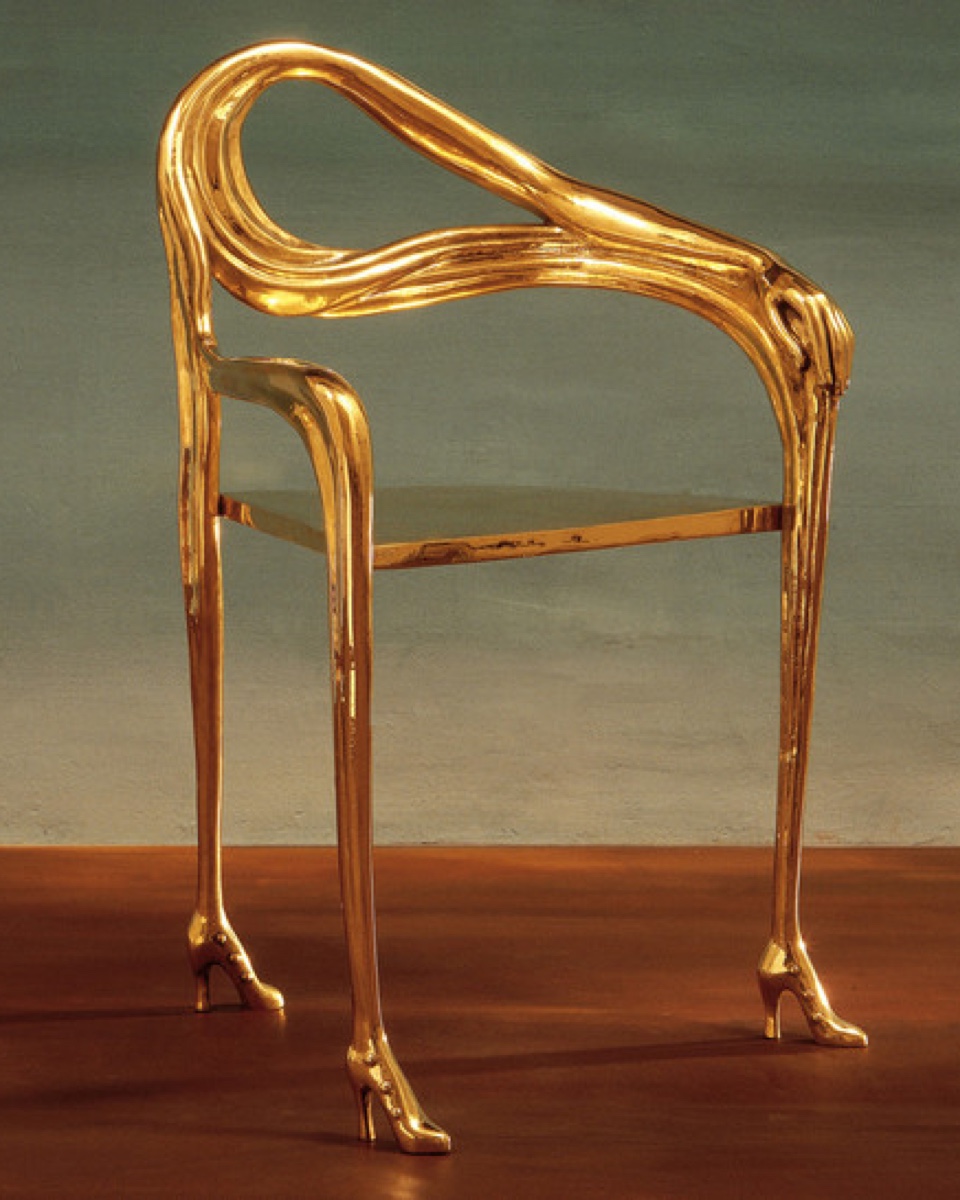 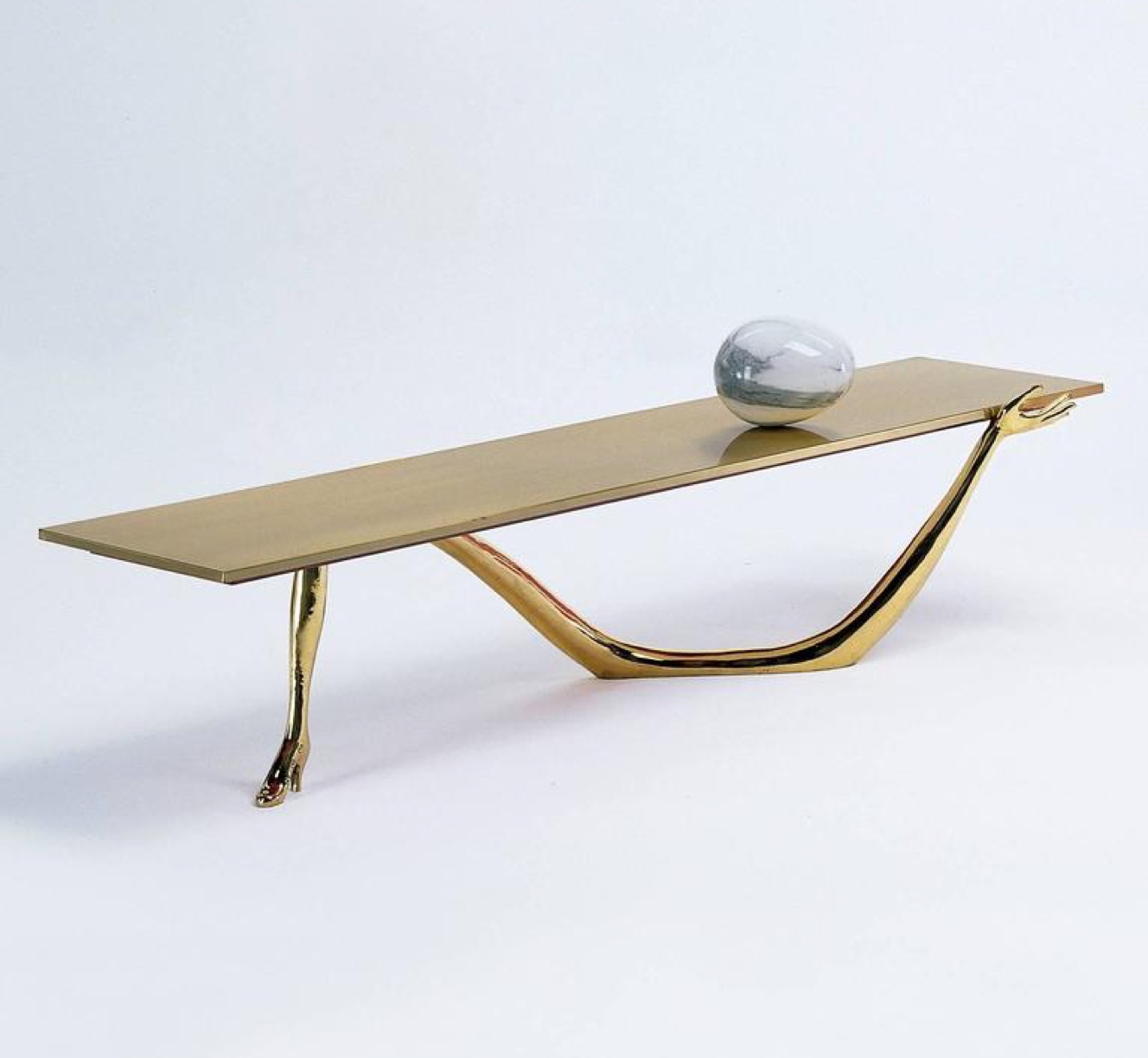 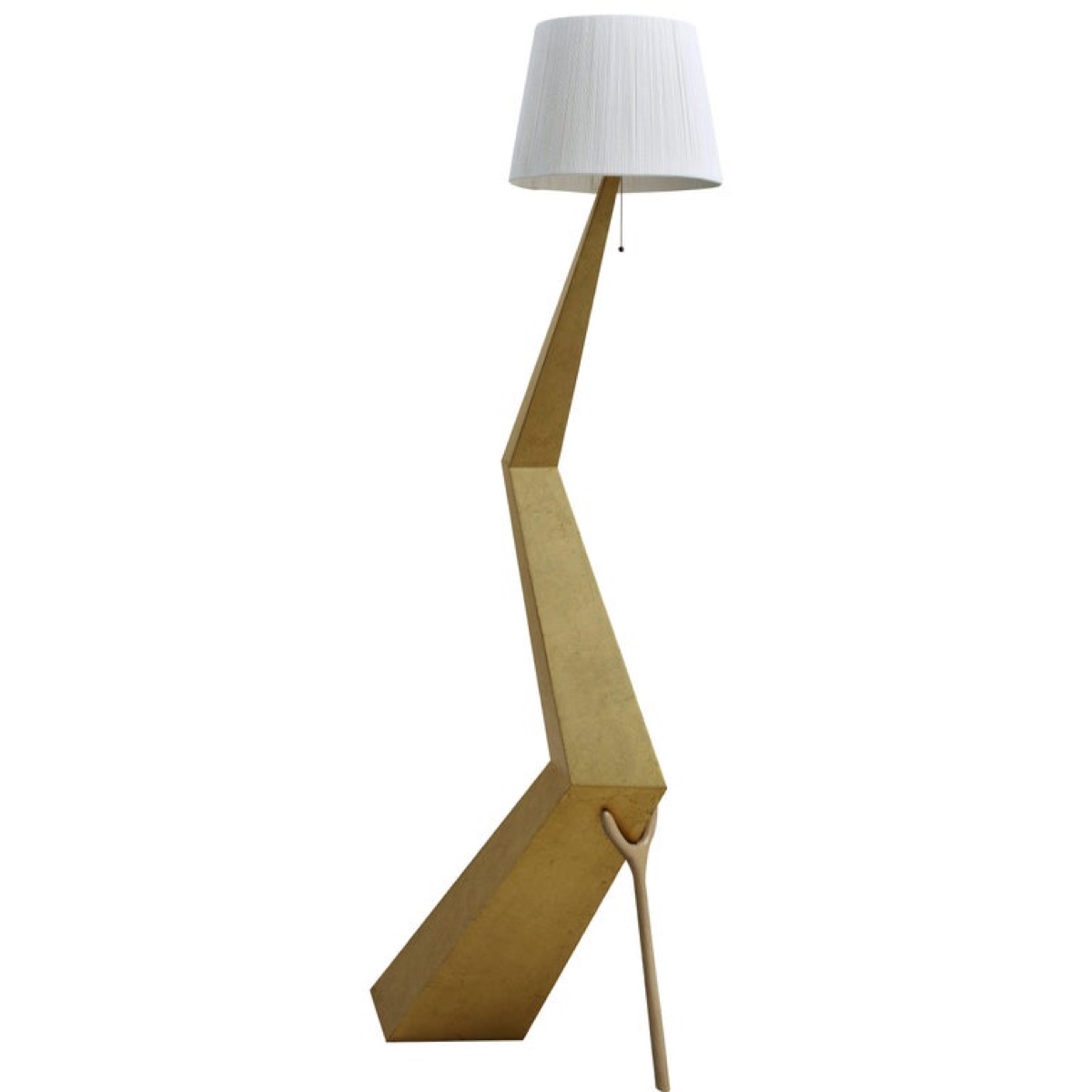 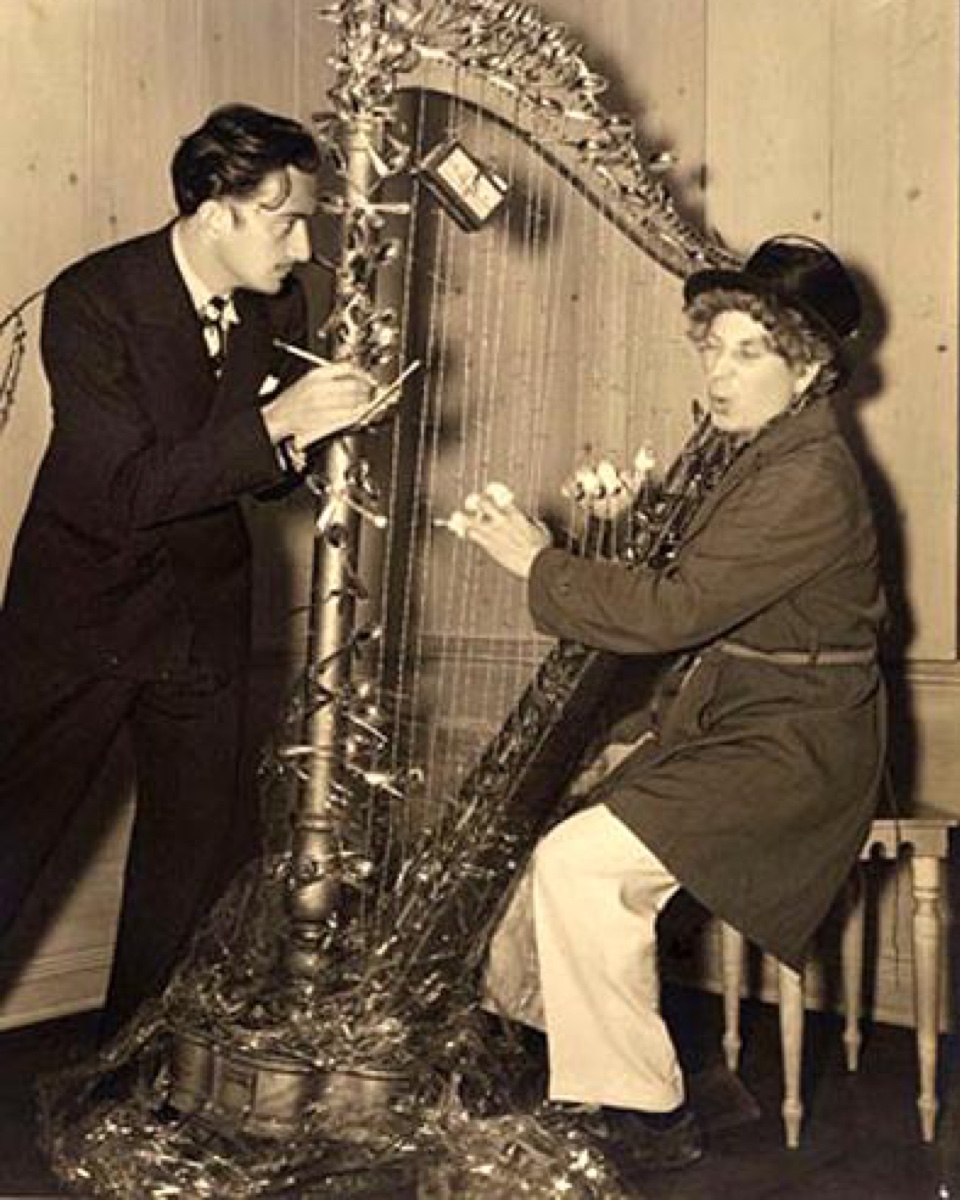 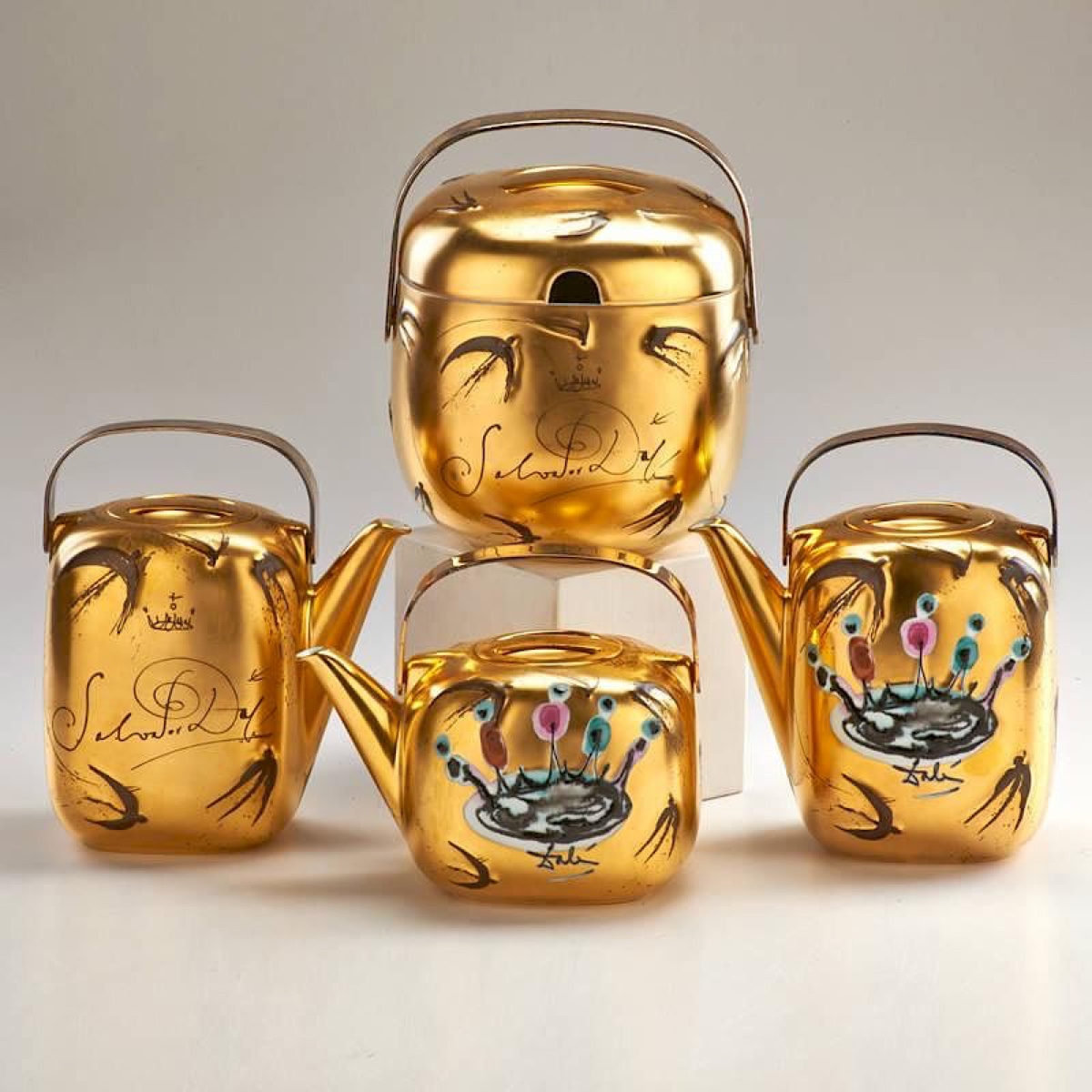 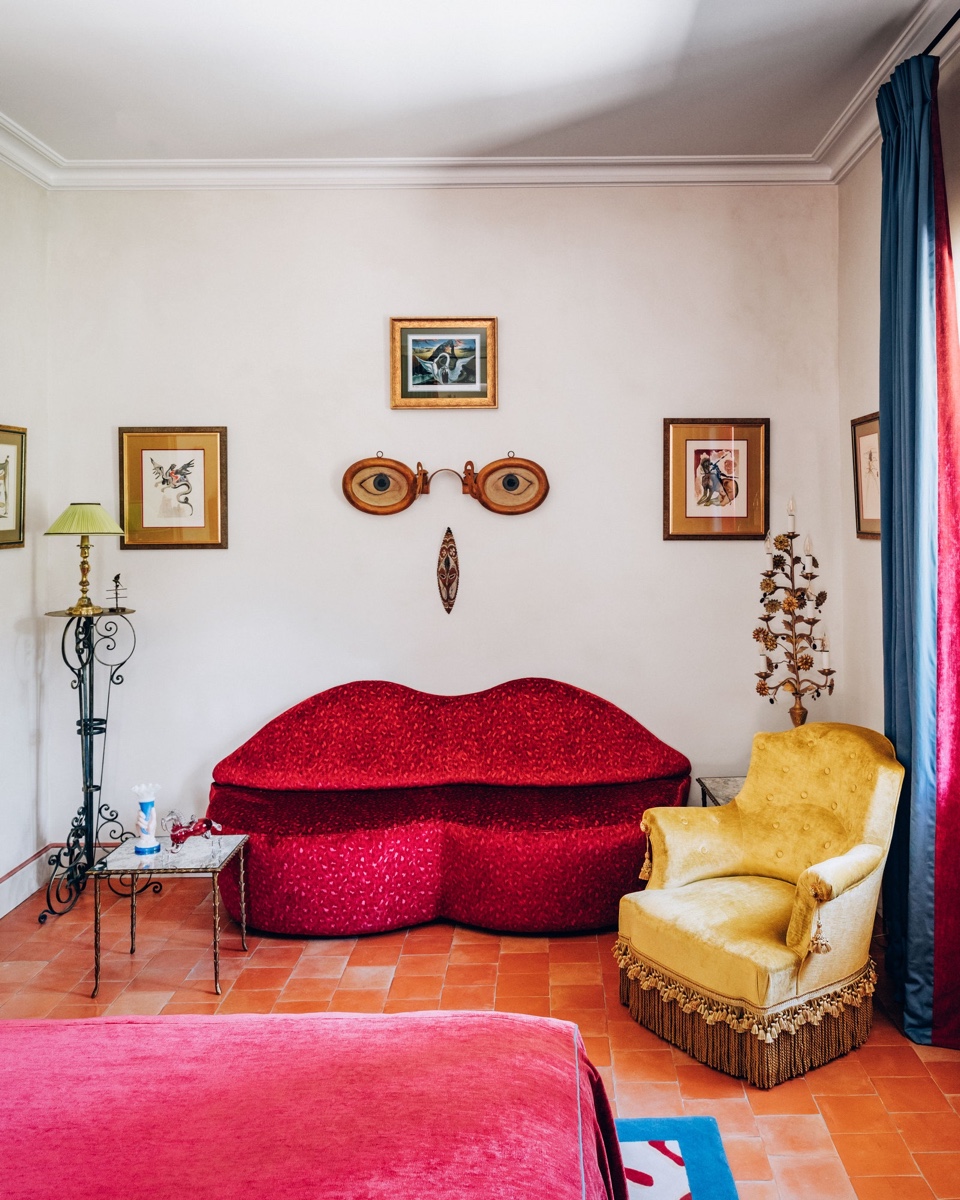 "Woman with a Head of Roses", painted in 1935. Image via Fundacio Gala-Salvador Dali.
The Leda chair in gold leaf.
The matching Leda Table. Image via FirstDibs.
The Lamp with Crutch, another of Dali's designs that made it to physical production. Image via FirstDibs.
Dali once gifted Harpo Marx (of the Marx brothers) a harp with barbed wire for string. Apparently, Harpo staged this photo and sent it to Dali after receiving the gift.
Pieces from Dali's 1970s dinnerware collection in collaboration with Suomi. Image via FirstDibs.
A later version of the Lips Sofa at Christian Dior's french home, photographed for Architectural Digest.

Dali’s work, in his own words, attempted to “create fantastic things, magical things, things like in a dream.” But it didn’t end with his death in 1989. Surrealism continues to be a driving force at the forefront of modern furniture design — Dali’s influence is obvious in the work of leading avant garde artists like Leo Orta & Victor Miklos and David Pompa. A dream becomes reality, indeed.

Learn more about Salvador Dali and his work.

The Ground Breaking Career of Architect Norma Sklarek
The woman who was a "first" many times over.
Read

How to Fend off the Winter Blues
Small ways to make the most of your space.
Read